Yesterday morning I drove up to Ringwood and uni, for two purposes – firstly, to get a corrected To Whom It May Concern letter indicating that I will graduate this year, not last year… an easy mistake to make, but a costly one for me, with all this running around, wasted time, etc – and secondly to drop off all manner of ancient computer junk to a recycling place in Ringwood, ERNi. I did that first, and it went well – roll up, drop stuff off, and leave. I wasn’t sure what, if anything, they’d want, but the guy seemed happy enough for me to just dump it all – they go through it later and work out what’s worth salvaging and what just gets scrapped.

I still felt a little reluctant to see off the old computers, especially the old PowerMacs which are actually still somewhat capable. But, I wasn’t going to have driven all that way for nothing. 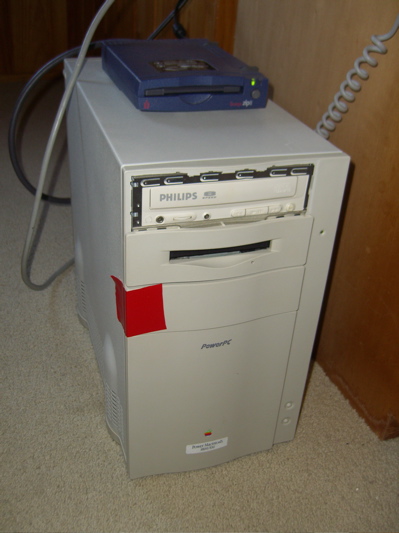 I did hesitate when it came to the external zip drive – it looked so relatively new and snazy, that I decided to keep it. But as it happened the guy came over to help, and grabbed it along with some other stuff… I could have said something, but I had the feeling it was for the best anyway; hanging on to even just one thing would be a terrible failure of resolve.

So, it’s all gone now… even the laser printer and the box of coax and phone cable and all that. Gone forever! Hopefully to a better place, but if nothing else at least it’ll be properly scraped, and not just go into landfill.

The uni stuff went well similarly – in and out in ten minutes.

I was tempted to take the afternoon off and catch up with Roxanne and/or others, but I decided against it… lots of work to do, and it was only just after noon at that point, so I figured I could get back to mum’s and get in a few solid hours before Laserforce. Which I did, more or less.