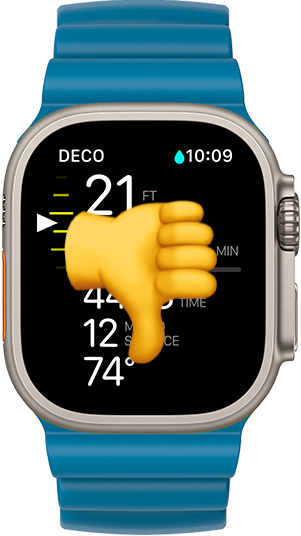 A major reason I purchased an Apple Watch Ultra was for its loudly advertised ability to function as a dive computer, much like some Garmins.

It’s been a rough and disappointing road.

Right out of the gate, it didn’t work. It requires a 3rd-party application, Oceanic+, which didn’t exist at Apple Watch Ultra release time. It was over two months before Oceanic+ was finally released, on November 28th.

As it happens, my dive trip plans were delayed a bit anyway, resulting in my first dive [since purchasing the Apple Watch Ultra] being on that exact day. Hallelujah, I thought. I was able to hastily install the app in the morning, before leaving for a remote, internet-less island for a week.

But then there was the surprise that it basically requires an expensive subscription ($80/year, or even more if you commit to less than a whole year). Without it you don’t get tissue load and NDL tracking – critical functions of a dive computer. I was not aware before purchase, from any of the Apple Watch Ultra advertising or product pages on Apple’s website, that this subscription would be required. It feels surprisingly shifty and dishonest from a company like Apple.

Arguably the above frustrations (and costs) could be overlooked if it actually worked well. Unfortunately, it does not.

I discovered serious flaws with Oceanic+ right from the first dive. Flaws that any qualified diver would immediately recognise, which begs the question of why Apple & Oceanic+ somehow haven’t.

There are two major design flaws in its most basic function, the recording of dives:

These two combine to make it unsafe for diving. It might be better than nothing, or acceptable as a backup computer (as long as you’re religious about ensuring it’s recording all the time), but it’s arguably worse than no dive computer at all in that it provides a false sense of security – you might plan many dives in one day, relying on the Apple Watch Ultra to precisely track your tissue loading, but have it fail midway and leave you with a dangerous decision to make.

What makes this all the more frustrating is that there’s a lot of things to like about it otherwise:

It feels like it’s actually close to being a pretty good dive computer & companion app, if not for a handful of bizarrely obvious, serious flaws.

It feels, in fact, like it was very rushed – from the obviously daft design flaws noted above, to even just simple things like bad grammar, poor alignment, and broken layout in the GUI (it smells like they’re using SwiftUI and haven’t figure out how to work around all its layout problems). It seems they put more time into their slick website than their actual product.

And of course there’s the other hint that maybe real-world testing was skipped – the fact that the iOS Oceanic+ app crashes on launch if you don’t have a good internet connection. On a boat, far from land? Or a remote island? Or in Airplane mode? Or just in an area with poor internet connectivity? No app for you. Crash on launch, every time. Forget about entering your dive details into the log while you actually remember them.

This remains the case even after six app updates over a month. Apparently Oceanic+ either don’t care that their app usually crashes on launch, or are incapable of fixing it.

Maybe there’s hope that in time they’ll be able to straighten all this out. But until then, I cannot in good conscience recommend the Apple Watch Ultra for diving. (it remains a fantastic watch for health-tracking and hiking, though)

For completeness, a list of other miscellaneous flaws and limitations:

Here’s a few things which are more just wishlist items (or: things you can get from some other dive computers, though you usually pay a lot more for those than you do an Apple Watch Ultra):

And lastly just some miscellanea:

I don’t regret getting my Apple Watch Ultra – it’s proven a worthwhile upgrade even just for its other features like battery life and a relatively large screen – but I am sad that I can’t actually rely on it for diving. And that I had to spend a lot of extra money to get a dive computer – the Peregrine – that I can rely on.

For reference, I’ve completed about fifty dives with the Apple Watch Ultra.