I just found this while reviewing some very old backups. Like most things of this ancient era, I’d completely forgotten about it, so it’s been fascinating to look back – as if in the 3rd person – at my younger, far away self.

I don’t recall why exactly, but evidently I had to write some kind of cover letter in order to intern at Apple. I don’t even know if this was addressed to Apple, or was perhaps just part of the visa process.

My internship offered at Apple Computer Inc. is a fantastic opportunity for me to be introduced to and get involved with one of the worlds leading and most innovative technology companies.  It will provide exposure to their current – and possibly future – hardware products, as well as the processes by which they develop them.

Additionally, the time in the U.S.A. will provide exposure to U.S. culture and general life, which will be an invaluable grounding should I pursue further work in the U.S.A. (at a later date).  While I have no immediate plans to do so, I would certainly like to have the option, as the U.S.A. is the worldwide hub for development of advanced computer technology – the best place for someone in my industry to end up.

In terms of furthering my studies and career, the impact is almost immeasurable.  My employability – not just in Australia, but also internationally – will be increased tremendously by the internship, both from the training and experience provided as well as from the impressive addition it would make to any resume.  Specifically, I hope it will open the door to future employment at Apple Computer Inc.

On a personal level, I’d like to see a bit of North America as a tourist, as much as I can – visit all the cliché spots, like the Grand Canyon, Death Valley, Yosemite, all those.  I think it’d be a great experience, and hopefully a lot of fun.

I’ve been to all three of those places now. Two out of the three were indeed fun, as hoped.

A fun footnote was that the internship paid $25 US / hour, @ 40 hours per week. That was about $33 AUD / hour, given exchange rates at the time. That compared preeetty favourably with my prior internships – $18.50 AUD / hour at NEC, $15.79 AUD / hour at PIRVic – and beat the pants off the first real job I recall having, at a flower nursery, in high school, for an amazing $5 AUD / hour.

In no particular order.

Curiously, there’s several other open-source projects of mine on Sourceforge that don’t show up in a web search for my name:

I’d forgotten about this until I stumbled across a reference to it again recently. 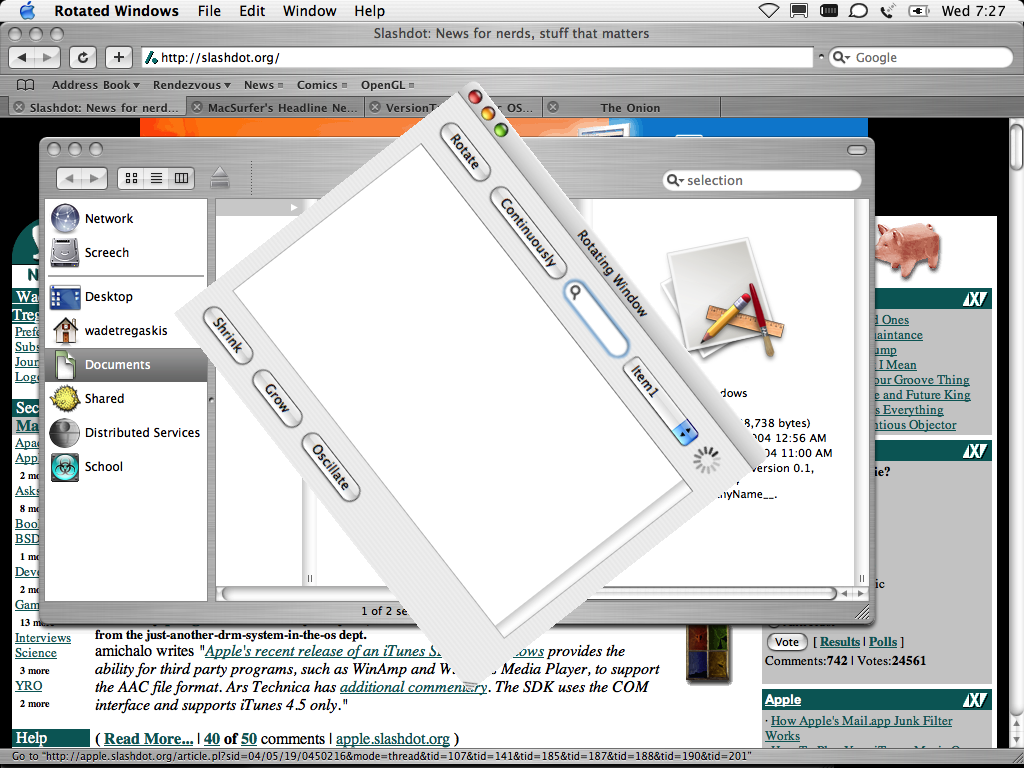 Wow, Slashdot looked even uglier than I remember, back then.  Though amusingly my daily reading list hasn’t changed substantially – it still features Slashdot and MacSurfer’s Headline News.

Man, do I not miss those shitty old monitors.

I don’t recall what the exact impetus was for the project.  I do recall that I was spurred on by Claus Atzenbeck, who was doing some kind of academic work into graphical user interfaces and, IIRC, wanted a way to explore window rotation and general manipulation in a real OS.

Claus’s personal website still exists, all these years later, though alas the link to his relevant research is now broken.

What reminded me of this was finding an attribution to me in a header file that was associated with the project – CoreGraphicsServices.h.  This was something I generated (presumably with the help of class-dump or similar) from the CoreGraphicsServices framework, and then partially reverse-engineered (in the sense of figuring out parameter types, function prerequisites, etc).  It’s what was necessary to find & use the private APIs for doing window geometry manipulation.

And the only reason my name is on it is because I splatted a 3-clause BSD license into the header file I made, which in hindsight seems highly dubious since the APIs themselves are owned by Apple (insofar as one can ‘own’ APIs, I guess…).

The source & other paraphernalia were originally posted on my La Trobe University student web hosting account, though of course that’s long gone.  Here’s the original StuffIt archive, if you’re interested.  I don’t actually know if it’s the very latest version – I do still have the project in full – but it’s the latest version I ever published, AFAIR.

I leave it as an exercise to the reader on how to decompress StuffIt files in this day and age. 🙂