Today’s exam was pretty mediocre. It was a fair enough exam, I guess, but just happened to include questions on the few things that I didn’t know all that well. Rob & Tony felt the same way about it, so at least we’re all unimpressed together.

I wouldn’t really want to hazard a guess as to how I went. I never do all that well in management subjects, and this time will certainly be no exception, so we’ll just wait and see.

After the exam I had intended to do some work, but I just couldn’t get into the mood for it. So, I got in touch with Chris and we organised to go grab something to eat and catch a movie. I was just pulling out onto Bell street when I noticed I had an unexpected guest passenger. 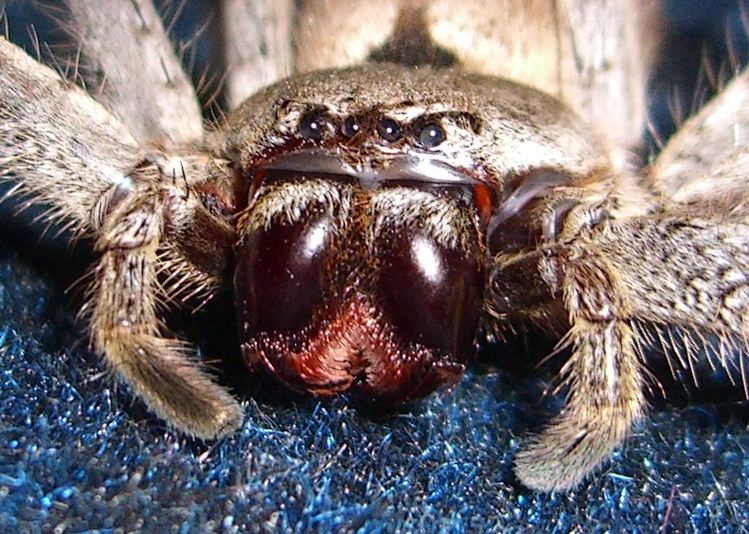 Nasty little bugger, innit he? He was doing me no real harm, just sitting in the middle of the dashboard, but he’s probably the one that’s been spinning webs on the inside of my windshield for the past week or so, and that just won’t do. Unfortunately, he had to go. Not motivated by my prodding with my steering wheel lock, he was conversely quite happy to hop into a box I got from the boot. Not so happy to come out, though – it took quite an amount of shaking and banging the box for the little guy to make a leap for freedom. He headed straight for the car parked next to me. Ah well, maybe he’ll be more welcome there. :)

Anyway, Chris & I ended up at Eastland, given we were coming from his work (Blackburn) and I was going to drop him home afterwards. I’m not sure I’ve ever been to Eastland before… it seemed nice enough, I guess. Luckily, they had a Pancake Parlour, so all was good. :D

The movie we watched was Click, with Adam Sandler in it (and Kate Beckinsale, who was Selene in Underworld, Emma in Emma, and Anna in Van Helsing, among others). It was surprisingly good. I quite like most of Adam Sandler’s movies, although I do recognise that his sense of humour isn’t always the most highly evolved. But Click was a bit different from his previous films – it had a strong storyline with plenty of jokes, but plenty of serious moments too.

The drive back from his place took 29 minutes this time, beating my previous time of 35. And that was with the poor weather, which kept me well below the speed limit for most of the way. I did have excellent luck with the lights, though. And I didn’t get lost once this time. :D