Now, some people will recall years ago I played The Sims feverishly. I primarily looked after a family containing myself, Sket, Bobo, Damien & Sarah. And occasionally a few others, who came and went.

Originally this just began as such because I lack the miniscule level of creativity necessary to invent an original family. ;) After playing for a while, the Sims started to represent their real life counterparts. So what, right? I’m controlling them, and often consciously sculpting them into their real life behaviours. All’s well.

Of course, what got really weird, was that after a few months with this little Sim family, it started to get ahead of reality… but was still completely accurate. It predicted (ahead of time, obviously) Bobo & Damien’s breakup, among numerous other events – most of which, I’ll admit, I’ve forgotten. But it was uncannily accurate. So much so that I stopped playing eventually, once it became evident that reality was following it step for step.

‘course, had I kept playing a little longer, Sim Sarah would have left Sim Wade, and I might have saved myself a whole lot of grief. Alas, my foresight did not match, apparently, that of The Sims. :D

So, now I’ve got it again – one of the games I bought in the U.S. – and I’ve finally fired it up for a few minutes of play. This time around the family is myself, Sket, Bobo, Gus, Damien and Whora (Laura, for the dysphemism-impaired). So, off goes our happy little household on the rickety roller coaster ride of fateful life… 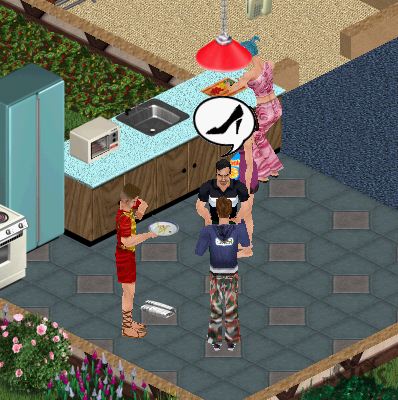 That’s Sim Gus & I having a conversation about high-heels… hmmm… with Sim Whora ever-close-by, Sim Sket preparing an exciting microwave meal, and Sim Damien enjoying his meal. Yes, he’s in Centurion outfit. I thought it the most fitting clothing, given the absence of of a model for G.I. Joe in drag.

Of course, things started off all too accurately. That plate seen above immediately went to the floor, with scraps still on it. That newspaper was previously tossed aside, into the middle of the floor.

And then, of course, mere minutes into gameplay, Sim Damien sets fire to the microwave. Yes, that’s him there, the one standing at the back looking on disturbingly calmly.

Things just went downhill from here. After another ten minutes or so, I gave up… The Sims seem inexplicably bound to portray reality far too exactly to be entertaining. And I don’t want to continue playing this uncomfortable household, lest fate somehow conspire to bring about reality, once more, from The Sims. Eek.