I got my iPhone today (and consequently didn’t get nearly as much work done as I would have otherwise ;) ). 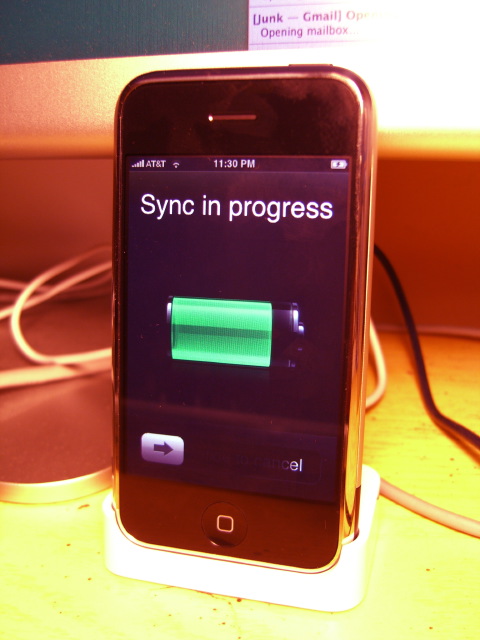 I was looking forward to it, but a bit sceptical – I’ve never liked mobiles, and even with the annoyance of not having a phone at all, I still wasn’t particularly compelled to get one.

But, once you’ve played with the iPhone for a little while it quickly grows on you. Typing is actually really simple and pretty fast – probably on par with that of ye old phones (with predictive text) in terms of speed, and a whole lot more fluent and intuitive. Browsing the web is horribly painful on this bastardised wannabe-3G EDGE crap, but on a decent 802.11 network it’s fast enough, and the browser itself certainly works well. My expectations for the phone were actually dampened a bit by my experience with the Wii a few weeks back, which demonstrated one really good way not to implement a web browsing experience. No such problems with the iPhone. I spent a lot of time checking Slashdot, Facebook, MacSurfer – pretty complex websites which can be annoying enough to navigate on a traditional computer. Surprisingly usable on the phone.

I wouldn’t throw MySpace at it though. That’d just be cruel.

Unsurprisingly though, I couldn’t actually sign up for a plan, because I’m not American (i.e. credit history strikes yet again). #@%! In the spirit of my surrogate country, I feel the strong desire to sue someone.

I was going to just say bugger it and work on unlocking the phone so I can get both a better deal and an actual plan – I’m sure I could find some provider that would actually want to steal my money – but having it sitting at my desk unusable got to me after a while, so I threw down the ridiculous amount for one month of prepaid. If nothing else it’ll give me an idea as to whether I want to pursue an AT&T plan or not, if it is ever possible to get one. And it is nice not to be locked into anything just yet.

So, that’s basically what I did today. :) I did work, too, naturally, and actually made some good progress on one of my current foci… so I’m looking forward to completing that tomorrow.