Well, I survived Florida – or more pointedly, the getting to and from there. I’ll start with the flights, because they were about half the waking time in the three day trip, and were interesting in their ways.

Our corporate travel agency hates me, this is clear. They routed me through Atlanta on the way over, L.A. on the way back. Granted when you’re sitting in an airport for three or four hours, it’s particular geographic location is largely irrelevant. Still.. they’re both big airports with an annoying habit of ensuring all common transfers require walking across the entire airport at least once.

But, the original flight plan had me going through Dallas, which would have been infinitely worse given they closed the airport about when I would have been flying. Dodged a bullet, I guess.

So going east is only four hours (just over), which was mildly bearable in the 737; one aisle, three seats either side, noticeably but not hugely smaller seats than your trans-Pacific 747s, which I use as a guide because they’re the smallest size you can actually be passably comfortable in.

So anyway, it was a little cramped and the plane was approximately full, but I watched The Ark of Truth and listened to music and the time passed quickly enough. I also saw the second half of August Rush, without sound. I have this strange habit of doing that these days, on planes… there’s still a couple of movies I’ve watched start to finish only without sound.

I had three hours to kill in Atlanta anyway, so I sat down and worked a bit. Because of the bad weather they’ve apparently been having there – it was perfectly fine while I was there, so I’m suspicious of their claims ;) – many many flights were being cancelled, and there were people desperately still trying to get onto alternative flights, having become stuck there the day before. My flight was the last one out to Orlando that night, leaving behind some thirty or forty others who still were stuck in Atlanta for another night. People were actually sleeping randomly about the place in the terminals and whatnot. I can’t recall ever seeing that before… I mean, in the only case where I’ve been stuck for a night, in Sydney, the airline put everyone up in a hotel; it seems the least they can do.

Anyway, so five or so hours later I finally got onto the 767 down to Orlando, which was a much better flight. Completely full, but a bigger plane, more spacious seating (always relative, of course). Music passed the time.

I didn’t get to the hotel ’till 1:15am, though it was lucky I got there at all given the crazy cab driver. It took a good forty minutes just to check-in; there were only two people on the front desk, and a steady stream of people arriving for the conference.

Which I should mention at least in passing, given it’s why I was there. ’twas the annual, national NSBE – National Society of Black Engineers – career fair, in a nutshell. It’s a very big affair, compared with the campus career fairs I’ve seen thus far – we had a large booth with 14 iMacs running, surrounded by a gaggle of us Apple folk. It felt quite a bit like a trade show – Macworld, say. The whos-who of corporate America, with nice, fancy booths, doing raffles for iPhones and giving away freebies and all the usual tricks.

It didn’t feel as personally busy as my previous experiences, but then there were five or six times more of us there, so there were undoubtedly far more people coming through. It was nice to not have such a feeling that you, individually, had to deal with every one of them, though. :)

As always, I was quite impressed with many, many of the people I spoke to. They really take it seriously here, career goals and internships and whatnot. Compared with Australia at least. Students much better understand the importance of real-world experience in terms of how it ultimately improves their chances when they graduate.

The fair – or at least the portion of it to which we applied – was Thursday and Friday afternoon. Well, actually it was apparently Thursday morning as well, but that never trickled it’s way from the organisers to our people, so, we rocked up a bit late to the party. :/ Anyway, it was a long five or so hours each day, but we had a good time Thursday night – dinner with representatives of various NSBE chapters at Roy’s, followed by general hanging in the bar at the hotel. It was a surprisingly effective way to unwind.

I should have stayed for the weekend, though – there’s plenty to do there, and though it’s approximately spring break at the moment, it didn’t seem that busy. This time of year’s not nearly as crazy as summer, apparently – so say the various taxi drivers we had. :)

They use Suburbans for taxis. Seriously. They can seat seven (plus driver), or, as in the case of getting to the airport, just one (plus driver). It seems so horrifically unnecessary.

Friday night most people were flying back, but the ten or so of us remaining went out for a last dinner, to Hooters of all places. :) I’d never been, and the idea tickled my fancy at the time – probably a combination of exhaustion and sleep deprivation, at that point :) – though it wasn’t my idea, for the record. :)

It was mostly what I’d expected – I mean, I think most people in the free world have some idea what Hooters is about. But I was expecting the waitresses to be in their thirties, which is how Hollywood’s portrayed them that I’ve seen. They were early twenties for the most part, in line with most chain restaurants here. All good looking plus – I wondered how the restaurant can get away with clearly biasing their hiring, but I suspect it’s the “models that serve” loophole I’ve heard about.

Anyway, the place was fine, the waitresses were polite, the walls were covered in kitchy crap and photos of forgotten 80’s celebrities back when it was hip for such people to visit Hooters… :) It wasn’t actually sleazy… corny at worst… and the food was actually good; I guess it has to be these days where PC is King.

There was a cool blues bar just across from that, though they had a $10 cover charge – I hate places with cover charges; I’ve never been to one where it was worth it… the plan was to go back to the hotel for a bit then head back out, but, I didn’t hear from anyone else and I myself immediately wanted to sleep as soon as I sat down in a half-comfy chair… I suspect everyone else was the same. As it was, my return flight was 7am, so a late night wasn’t wise.

Flying back wasn’t as good as the way over. The USB cable I took decided not to work this time around, which didn’t surprise me, but nonetheless left me with a dead iPod and a nearly-dead iPhone… the MacBook I took was giving me a solid five hours or so battery life, but I couldn’t work on the plane – people looking over shoulders and all that – and didn’t have anything else loaded up on it to do, short of writing my memoirs or starting the great American Novel, as they say. I toyed with the latter idea – creative writing – for a little bit, but couldn’t settle on an opening line that wasn’t a cliché.

I tried to sleep a bit… I dozed, but couldn’t really get comfortable. The seat next to me was empty, which was a mild blessing, but it was a 757 which is apparently exactly like a 737 but 20 model numbers higher, and very important distinction. Pfft.

The scary thing was the plane from LAX to SJC: 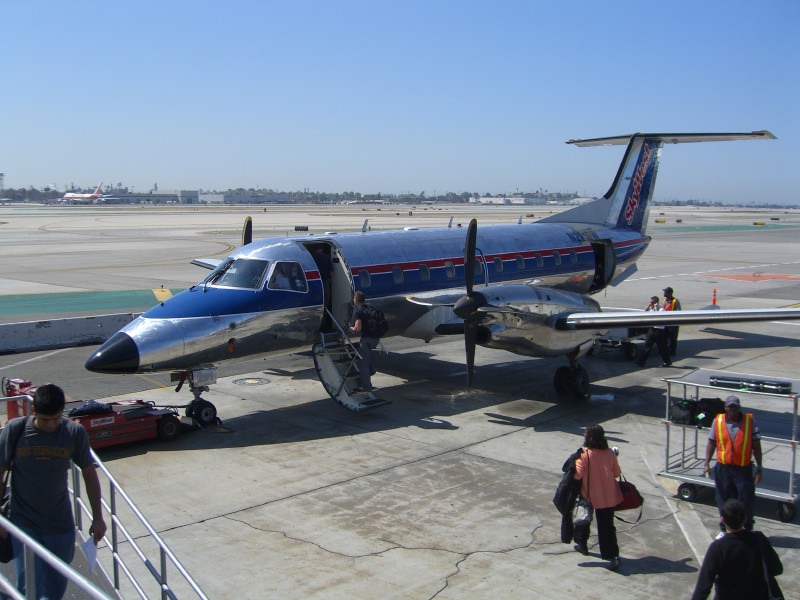 Seriously. I didn’t think they still ran prop planes, except for regional transport and skydiving. Certainly not between two of the biggest cities on the west coast. It makes no sense. This thing seats exactly 30 passengers, with one lonely air hostess and the pilot. That’s it. There must be more than 30 people flying this route every day – heck, I’d wager there’s thousands. I don’t understand why they still run these things.

The flight itself wasn’t too bad – slow, at about 85 minutes or so, which is nearly twice what it takes in a real plane. But it wasn’t actually that uncomfortable – noticeably better than the crappy-arse “American Eagle” thing I flew on a few years back (on the same route, too). It had a novelty to it, with the small-plane feel over all the small bumps and pockets of turbulence. Not that we really had any, which was a shame… the invention of weather radar has really made air travel boring. :(

And the air hostess was cute. I mention it only because it’s actually very rare. I think I’ve been around enough now – on planes, naturally ;) – to be fairly qualified in such judgement. The whole “cute air hostess” stereotype is a complete fallacy.

Flying across the country, in the middle somewhere – Texas? I dunno – there’s a part where all the square lots of farmland have circles of crops in them. Some of the circles are sectored into different crops. Some have a 60° sector cut out with nothing in it, just dirt. Can you picture what I’m seeing yet? :) Even better, some have a big circle with the 60° out, and another smaller circle in the wedge. It’s picture perfect. All they need is a small crop circle to mark out the eye, and it’s the true embodiment of PacMan himself, in Maize. :D

I so want to buy a few thousand hectares and build out an entire level. :)

I’m not sure about the accuracy of the attribution there, given the quote is culled from bash.org, but, I love the quote nonetheless. :)

Anyway, I digress. ’twas interesting watching the PacMen munch by far below. Didn’t do much to moot the drudgery of the flight. iPod & iPhone were dead, and as noted I only dozed lightly. I caught August Rush, in mute, again, this time from the start.

All in all it was a good trip, even counting the travel involved. In terms of work I think we did very well – many, many promising people – and as noted it was quite fun socially. Next time I’m taking a working USB cable, though. And a few days to check the place out properly, going beyond merely the hotel and convention centre.

One of the weird things is how much Florida – Orlando, at least – is actually Hollywood’s California. It’s attractive, it’s warm, it has good restaurants and entertainment and bars, live music, shows, hot girls everywhere… it is exactly how California is described. ‘cept California’s not like that, at least for pretty much every part of it I’ve seen.

They probably don’t have good skiing though. :)