I managed to drag a few people out ice skating last night. I also went last Friday, with Ange and her friend Ben (plus his son), which was good. I finally started feeling reasonably confident – I’m finding it quite easy now to keep on my feet, even while zigzagging and spinning around and whatnot. I still have a bit of trouble turning right – the flow is nearly always anti-clockwise – but I think I can work that out. :)

So last night there were quite a few more people – Rob & Jess came, finally convinced to try ice skating. They rollerskate/rollerblade twice a week, but once a month their local rink has a disco (sans skates) on a Friday, so last night they had to find something else to do. They brought a few friends, too – Rob whom I’ve met before, speed-skating Kim (a guy) and Peter. Shane also made an appearance, although he was only on the ice for a few moments – I did a lap and missed the whole thing. Ice skating’s not his thing, I guess.

And of course Tony… he’s never ice skated before, and rollerbladed only as a very young child. I was somehow expecting him to be slow and careful and nervous… I don’t know what I was thinking. He was confident, brazen and at times quite speedy. He did the usual thing of trying to walk, but very quickly got over that… he was obviously trying to skate properly, but just needs a bit of experience to get the balance. Although his agility is impressive – he spent half his time it seemed in a state of falling, but very rarely actually fell. I think he’d do very very well if he skated regularly; hopefully I can convince him to come next time as well.

From the other end of the world (so to speak) we had Laz & Peta (spelling unknown), Alco & Ange, along with Sarah & Chantelle. I think that’s everyone. Sarah & Chantelle didn’t skate… Chantelle wasn’t feeling all that great, and Sarah was playing the pov card. Ange, Alco & Laz also didn’t spend much time on the ice. In the end they all left a good half an hour early… Chantelle needed to get out of the cold, and with all the carpooling and whatnot that apparently set off a chain reaction. Ah well.

So Jess is quite good. As is Rob, and Kim of course. Jess immediately targeted the best figure skater in the place, and showered him in questions about ice skating, ice skates, tricks, hints, tips, and whatever else. She also tried to film him a few times, with Rob’s camera, but it didn’t seem to be playing nice, and didn’t record the desired moments.

I took my camera as well. I don’t usually, but I thought with Tony the Newbie, plus whoever else might turn up, that it could be interesting. As it was, with Sarah and so many others on the sidelines the whole time, I left it with them mostly, and got a few good shots by their courtesy. I’ll go through those and put them up sometime, probably next week once project’s more or less over. I’ll provide this one as a teaser – the moment before Tony’s first venture onto the ice. 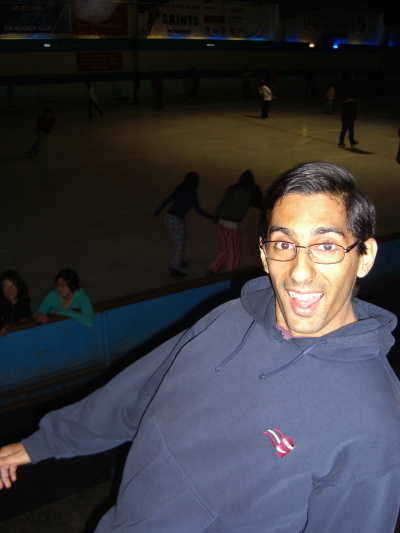 I did quite well overall. With Jess’ encouragement I finally started doing cross-overs (again; I used to be fine at them years ago) and am working on skating backwards. I can glide in any direction just fine – it’s just the propulsion aspect that gets me… but I can nearly turn back around from backwards fluidly, so it’s not such an issue. :D

Next week Rob & Jess are trying to convince me to go rollerblading with them instead of ice skating, which I think I might do… I’m interested in trying rollerblading again, having not donned a pair of blades for many many years now. They reckon it’s better than ice skating, which I tend to disagree with, but we shall see. Having a smooth surface to skate on would be nice, though.

I attracted quite a few comments from other skaters, or at least someone near me did. They ranged from “Freak!” (given my current teenage werewolf appearance, possibly approrpiate) to “Wow, you’re really good!” (which I don’t think could have been directed at me :) ).

Anyway, I’m determined to keep making progress, so next time I’m back on the ice I’ll be perfecting cross-overs and skating backwards. I also tenderly tried a few spins… like most things, they seem to just require commitment, so we’ll see how brave I become…