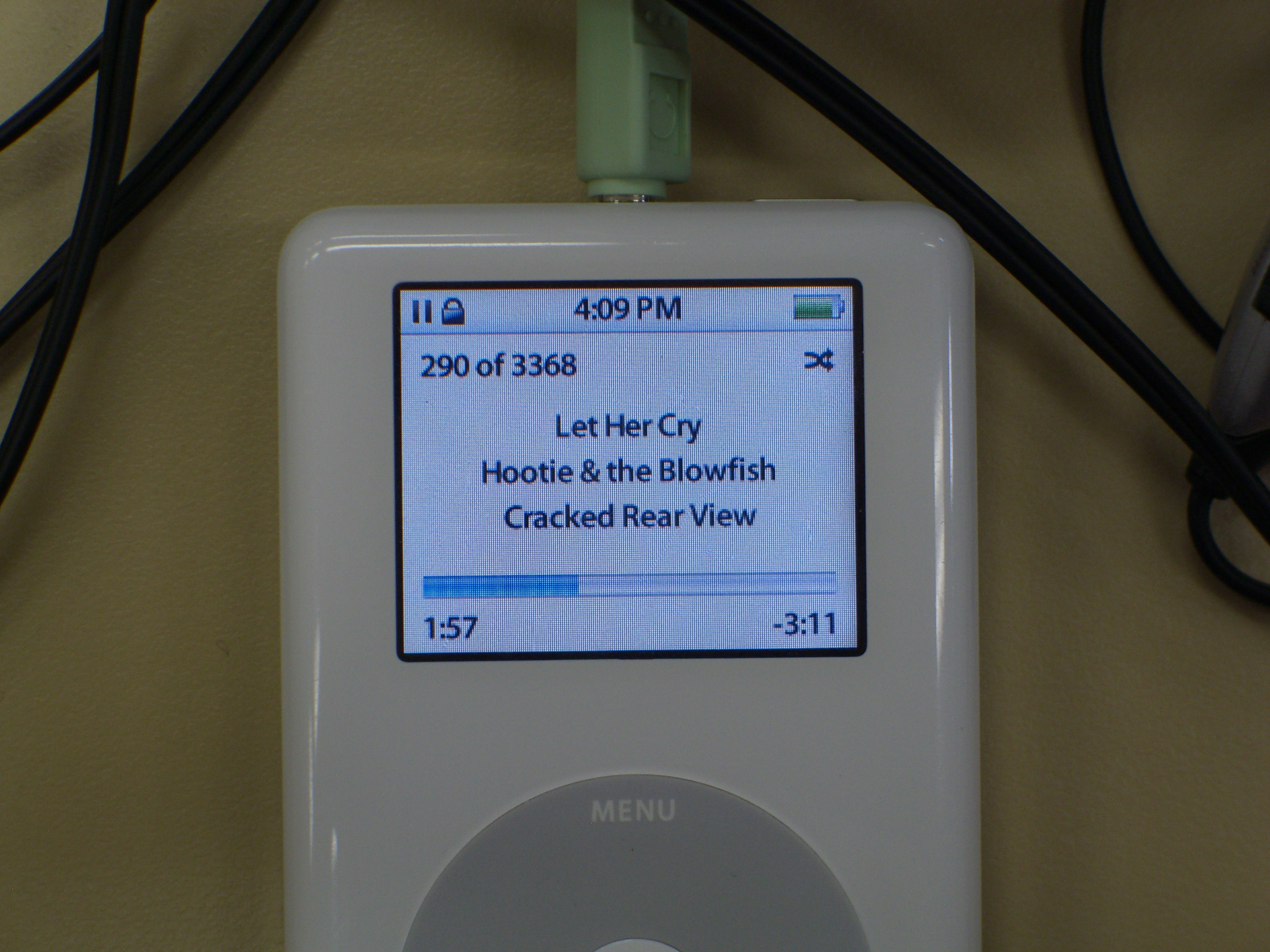 That was my first iPod.

And I still have that song, too.

I don’t really recall my impression of the original iPod when it launched.  I want to say I was interested in it, and thought it was cool.  Prior to receiving my iPod I had a MP3 disc player – a Rio Volt, like this one: 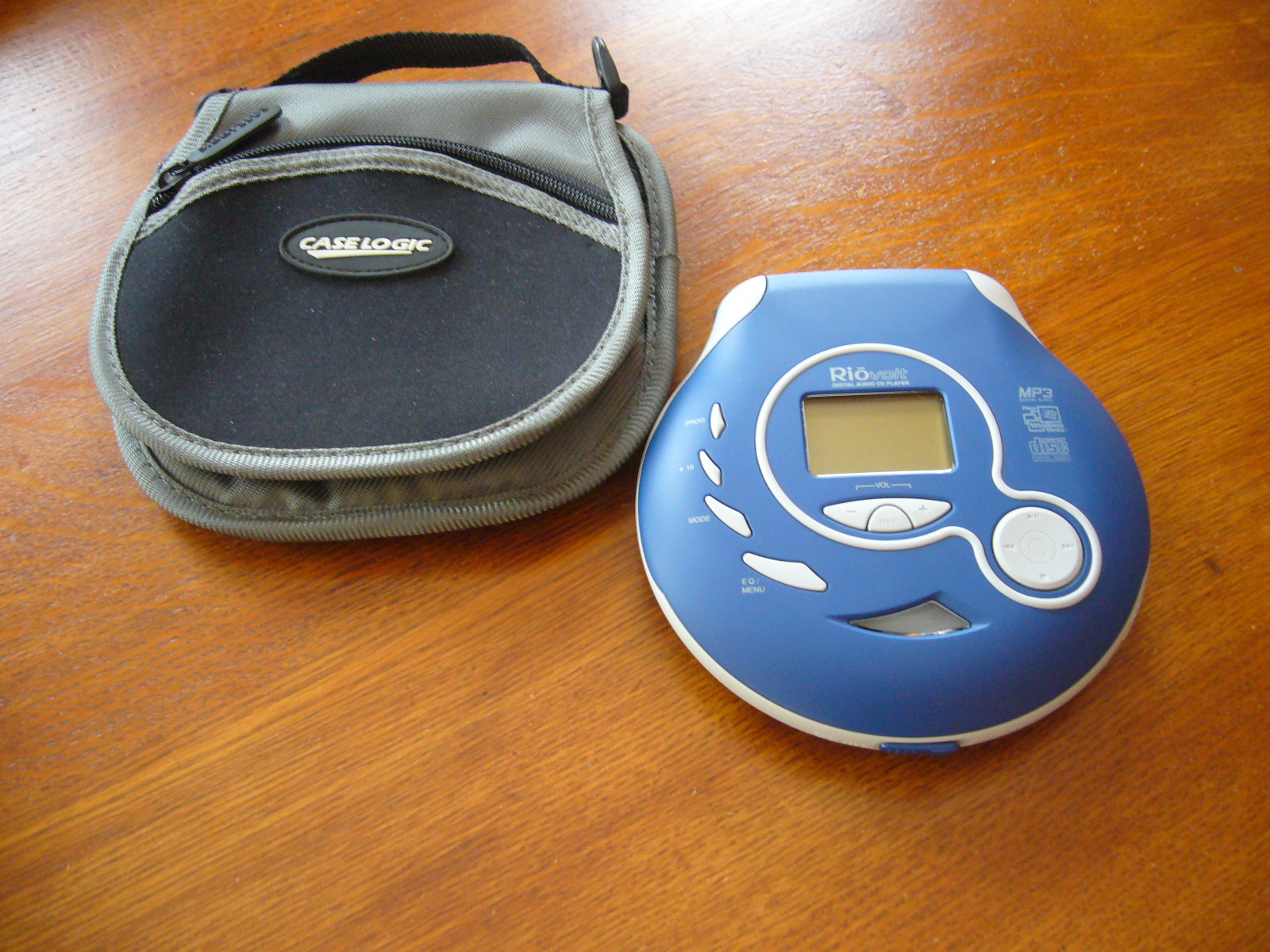 I don’t seem to have any photos of my actual one, nor any idea where it is now – I’m pretty sure I got rid of it – so that one’s courtesy of Nicole Hennig via Flickr.

And no, prior to writing this post I didn’t actually remember what it was, just what it looked like.  Internet image search is awesome.

I didn’t have that – or any – case for it though.  I just carried it bare.  Until very recently, with the iPhone 6s and iPad Air 2, I eschewed cases for portable devices.

Well, other than that original iPod Photo, that is – I did actually buy one of Apple’s iPod socks.  I still have it all, too! 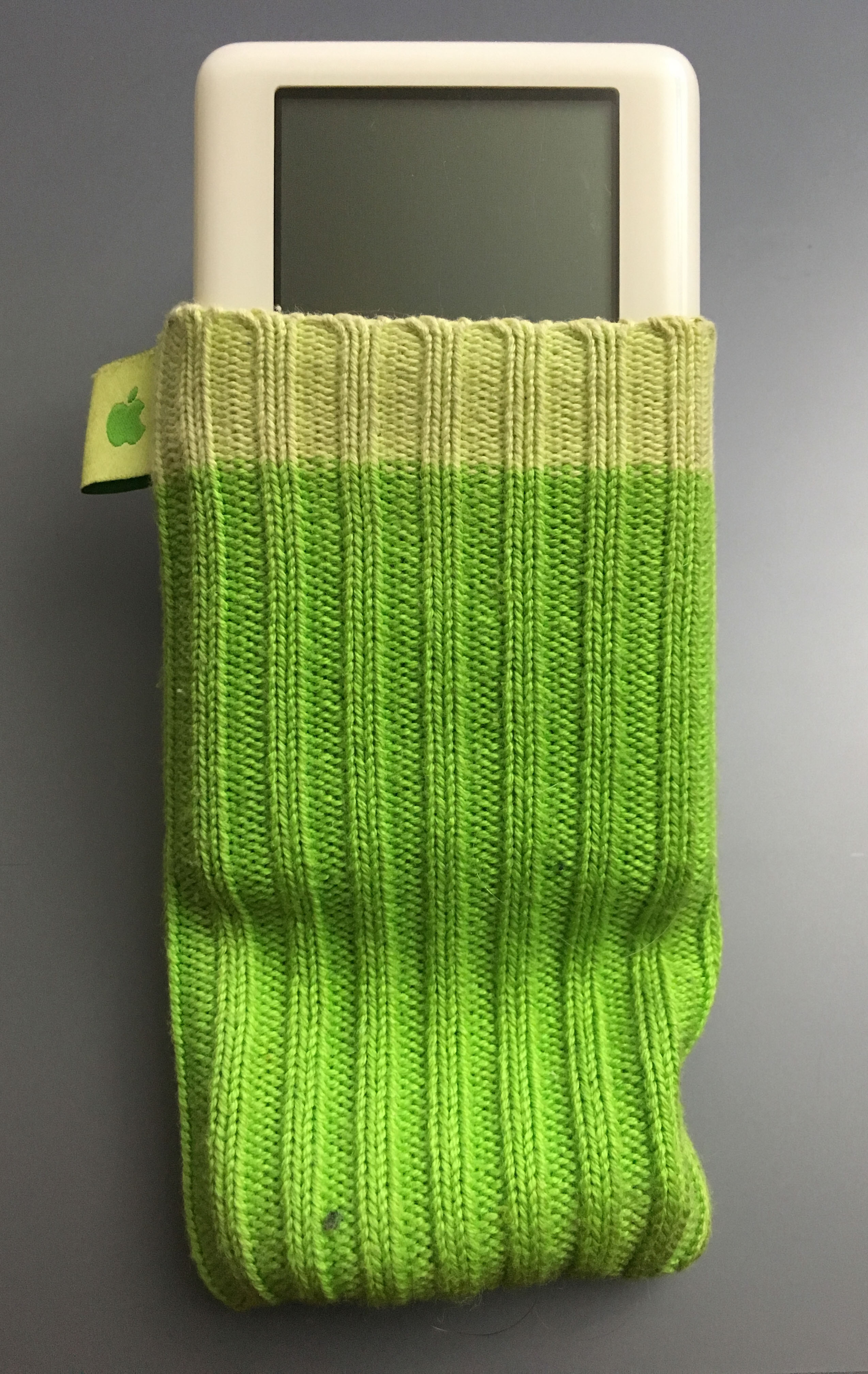 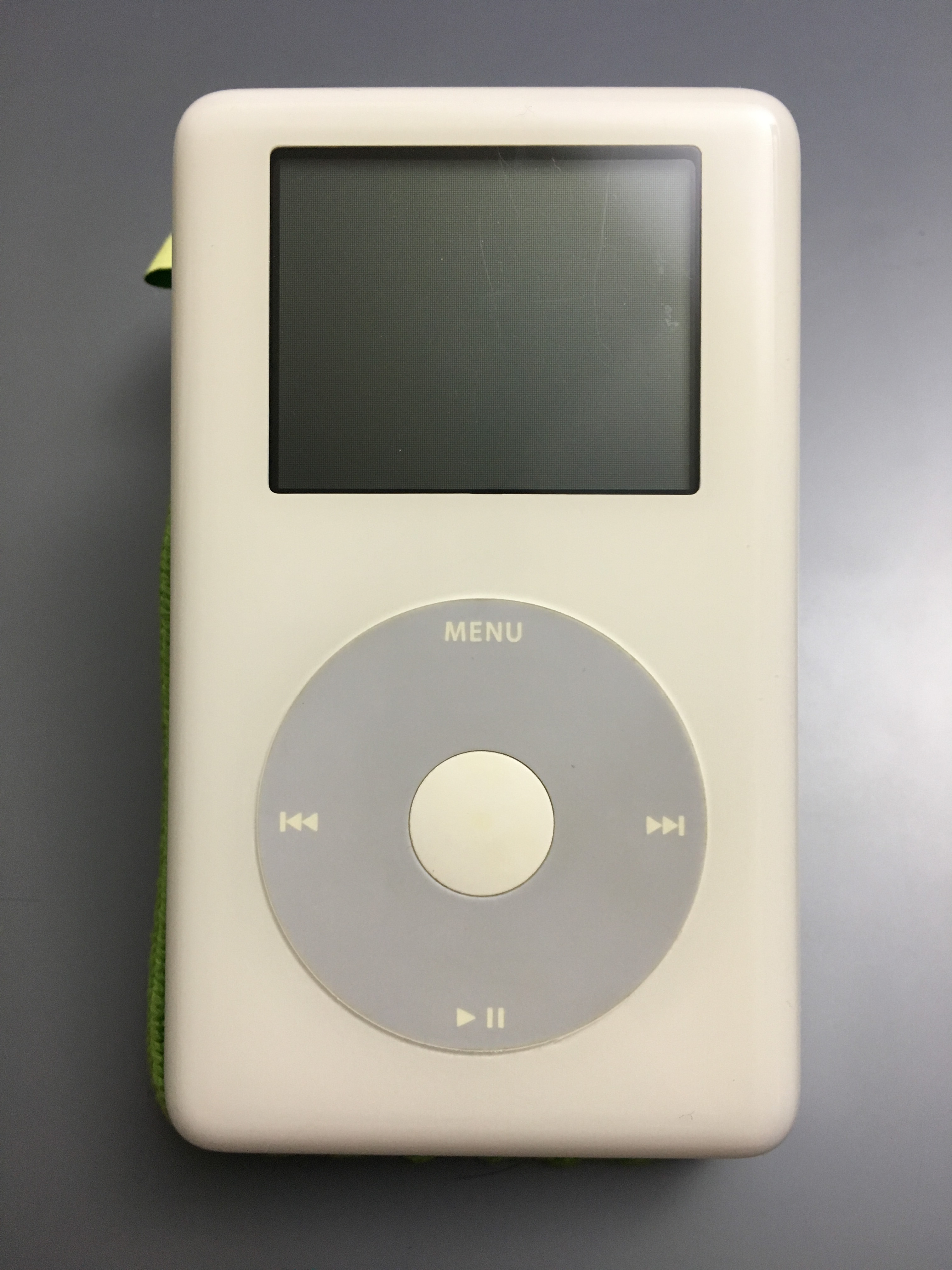 I used it constantly, to my own recollection.  I’d use it while commuting in particular, from home to uni, or to parents’ & girlfriend’s homes on weekends, etc.  Very handy for two+ hour tram & train commutes.

I recall also using it at the Apple gym when I was first there, to pass the time.  Though I fuzzily recall I gradually transitioned to watching TV instead – that was the first place I saw Big Bang Theory & How I Met Your Mother, I think…

After some number of years the battery basically stopped working (due to age), and it was relegated to my car where it could be plugged in via a power adapter.

I don’t really recall when I stopped using it entirely… presumably it was eventually obsoleted by an iPhone.  That’s certainly what I use for audio in the car now, like most people.

But it’s still in my car.  Or at least, it was, until I wrote this and dug it out again.  Now it can take pride of place in my museum of ancient Apple devices, next to my original iPad.

And it still works, too. 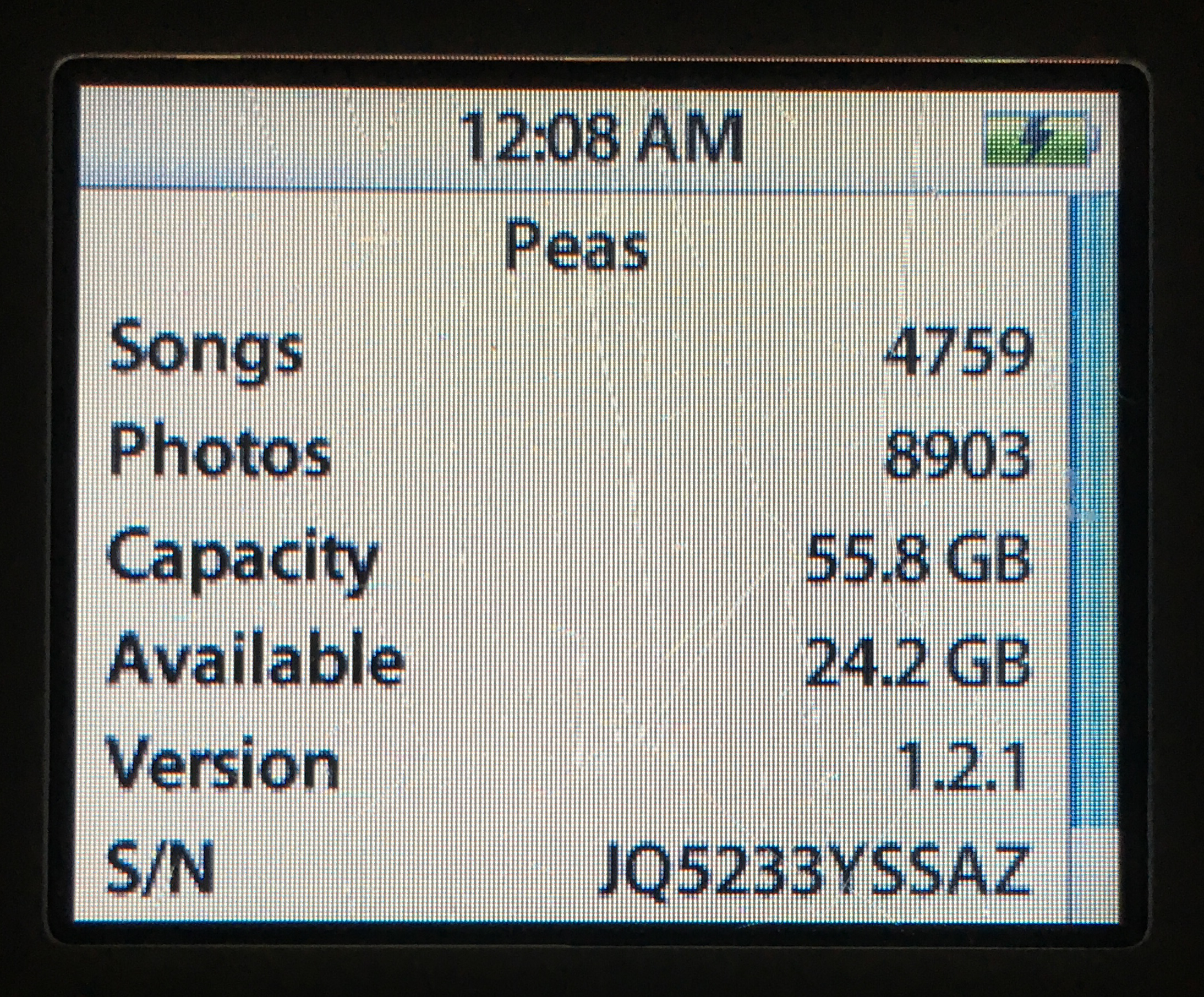 Other than the fact that the Menu button often registers as the centre-click instead, which makes it very hard to use.  Looks like it gets stuck… possibly a consequence of spending the better part of a decade at the bottom of my car’s centre console.

Apparently I used it in some fashion until at least 2010 – it has photos & podcasts from that era synced to it.  Marisa remembers me still using it frequently when we first dated.

And I also still have the Altec Lansing AHS502i over-ear headphones from way back… I know I started with the iPod earbuds initially, but after they all just kept dying (known reliability issue with them for years… I’m surprised there weren’t more class actions), I eventually got some real headphones.