I’m trying to go through day by day over the last week, and write on what happened on each, but my memory’s all muddled and I can’t really recall what I actually did on some days. Like last Friday… I think I probably spent most of the day just cleaning stuff up – primarily sorting through my CD collection. There was all sorts of crap in it – MacFormat’s from nine years ago, for example – which I really don’t actually need anymore. Since I’d run out of rack storage yet again, despite having two 90-CD racks and a couple of twenties, I figured it was time well spent to find some more space.

I was surprised by just how much there was – hundreds of CDs. Many of them were just completely useless now – Windows drivers for a printer that stopped working four years ago, for example. So, I recycled the cases and started stacking up unwanted CDs. I thought I’d end up with a small pile, but was surprised just how many there ultimately was. 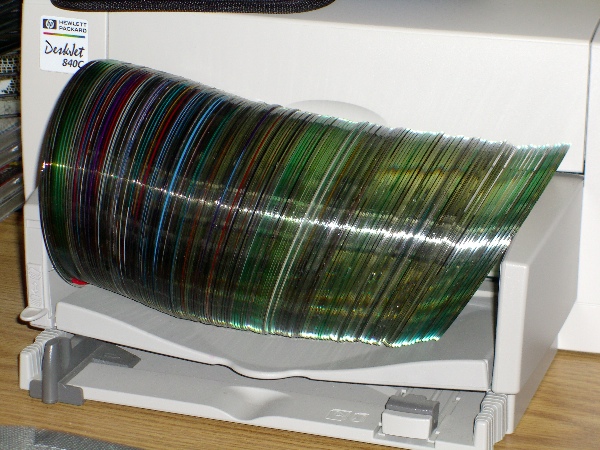 For those that can’t be bothered counting, I took the initiative of doing that myself, and came out to 150. Well, actually I came to 149 first up, but I really wanted a nice round 150, so I found an extra CD I didn’t want that much to add in. :D

(and unfortunately my dad went through later and stole off with three or four CDs, so I’m back down to one-forty-something :) )

So now the problem is, what do I do with nearly 150 unwanted CDs and DVDs? I was trying to come up with ideas, but most have been meek at best. I thought about smashing them into fragments which could be tiled under resin on a tabletop or somesuch, like you often see with pastel tiles or ceramic fragments, but I kinda think that would look pretty tacky. I also thought about breaking them into wedges and gluing them into a giant polystyrene ball, to make a kind of angry disco ball. I don’t think that’s such a bad idea, but I’m not sure it’ll turn out that great.

Another thought, which is the first I’ve received from everyone I’ve asked suggestions from, is to take them to a clay pigeon shooting range. :D There is in fact one just down the road here from my dad’s, which is just too convenient. :D

Still, that seems both lacking in creativity and rather environmentally unfriendly – are they going to go through afterwards and pick up every shard of toxic CD? I don’t think so. And I’m sure they wouldn’t allow it anyway; health & safety and licensing and all that jazz.

So anyway, a cute idea, but not very practical. So, I’m still calling for suggestions – preferably creative or unusual; sticking them in microwaves or on electric drills has been done before.

I can’t recall what I ended up doing Friday night… just stayed at home with dad, I think, watching tv or somesuch. I remember watching Hocus Pocus, which might have been Friday night. It’s been ages since I’ve seen that movie… it’s still mildly entertaining the second time around, but doesn’t have enough subtlety to make it truly worthwhile.