Today I came around to nana & pop’s again, browsed the web for a while, checked my email – all the usual. Chris arrived unannounced – albeit not entirely unexpected, given he’d mentioned potentially coming down today when I last saw him, last week – and together with pop we set about cleaning up the garage even further. I had been hoping to find a trailer from somewhere, for a tip run, but the opportunity didn’t arise. So, my boot was to suffice. At least I have a station wagon.

It was difficult to actually get anything thrown out, though – pop insisted on keeping so much stuff, particularly books, that he really doesn’t need. I could understand sentimental value, but it wasn’t that – he was happy to throw out all his old hand-written letters, documents, etc. What he really wanted to keep were his books on “modern” electronics from the 50’s and 60’s, and things like “Science Fact”, “The latest amazing developments that will transform your life”, from 1977. It includes all manner of precisely accurate predictions, such as that by the late 80’s there will be a giant American space station carrying hundreds of people, or that at the turn of the next century (i.e. now) computer A.I.’s will be at least as intelligent as humans, and we may indeed already be in a man vs machine war. I think I’ve seen that movie. :)

There’s also one little gem we’ve discovered which is actually worth a look – a copy of “Rising Tide”, the Mornington High School annual magazine / yearbook, from 1969. Scary stuff. The house names back then were Beleura, Coolart, Tuerong and Tanti. Yes, Tanti. No written record (in here, at least) as to whether you had to bring your own moccasins to belong to Tanti house.. :P 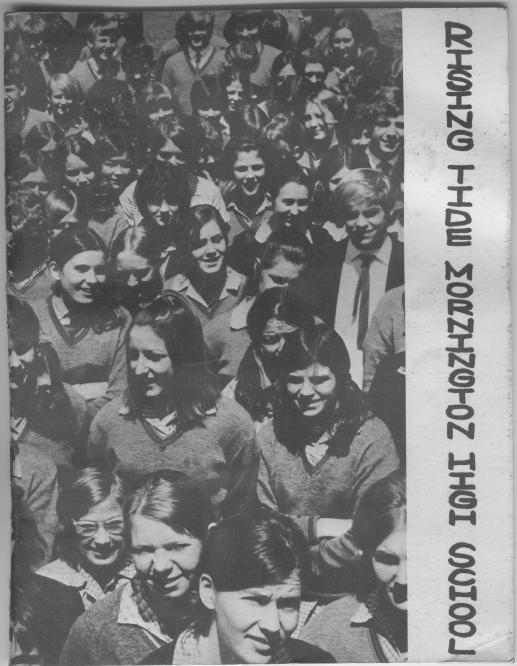 Their description of the house name is:

“Tanti House takes its name from Tanti Park, first selected by William Robertson in 1855. A later owner, Justice Webb, laid the foundation stone of the Mornington Mechanics’ Institution in 1885. The origin of the word ‘Tanti’, also given to an important Mornington street and a historic hotel, is believed to be from the aboriginal ‘Yanty Cran’ which meant black dog.”

That year the school production was Gilbert and Sullivan’s “H.M.S. Pinafore”. And I love the description for Senior Football in the Sport reports:

Although the scores for each game indicated that we were defeated, they did not give an accurate indication as to how the games were played. In each match we were by far the better side for the first three quarters, but owing to a lack of fitness, we were defeated in the last quarter.

It continues, though, with Boys’ Baseball:

After an enthusiastic beginning to the season, we lost the source of inspiration, our coach, Mr Harrison, and also lost every match, to keep up the tradition.

And the girls’ hockey notes, which end with – after three long paragraphs on what must be the two senior teams – “The under 15 hockey team performed very well also.”. Sucks to be them. :/

What’s really the scariest, though, is the photos. While only B&W – which is probably for the best, really – they reveal perfectly the fashion of the day. There are these so-called “mini skirts”, you see, which would be more accurately described as “almost skirts”, in so far as a belt is one. And school girls today hike up their knee-length dresses that extra inch, to the horror of their mothers… boy, I wish I could give every school girl on the peninsula a copy of their mum’s school photos… that’d sure settle a few disputes quick smart. 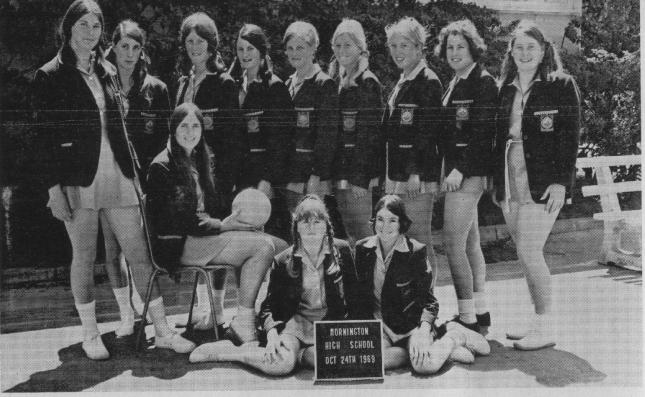 I used this photo not because it demonstrated the point most succinctly, but because it was one of the few that was re-printable; someone needed to tell a few of those girls to keep their legs together – I mean, I know it was the 60’s and all, but at least for the school photos..

Also, in the photos section, hidden down the bottom, is this small tirade – an oxymoron, I know, but I liked the word “tirade” :P – :

There were three reasons why no senior boys' team photographs were taken:

(i) Many boys did not have the correct sporting attire;
(ii) Several were excluded from the photographs because of their long hair;
(iii) The rest of the boys boycotted the photographer, because of reason (ii) above.

There you are then.

Update: Two people have contacted me in the years since I first put this up.  The first to confess that she was one of the girls pictured above, and to correct me that it’s the Volleyball team in their sports uniforms.  The second was to elaborate on the missing senior boys’ photo:

I remember this incident very well in fact I was the instigator .
Dirty Dave Young was told by Ron Heine (the prick)his hair was too long for the photo and to stand down .
So a few of us young rads said if he was good enough to represent the school he was good enough to have his photo taken for the magazine.
So we said, no Dave no photos that year .
It was then that many of us realized that these people only have the power you are prepared to give them.