First up, Saturday. I didn’t do a whole lot – spent a fair bit of it working, and did some more work on the cat cage. We finished the frame, so all that’s left now is the wire. It was a reasonably productive day, all in all.

Sunday, I had been planning all week to head to RoboWars. Rob had originally mentioned it to me – he’d been looking for go-karting prices on Sidetracked’s website and saw the advertisement. He had intended to go as well, but other engagements got the better of him. I mentioned it to a lot of people – it’s something that, on the surface at least, seems attractive to a wide demographic, provided that demographic is male :) – and many at least feigned interest, but no one ever indicated they were actually going. :/

Anyway, I woke up Sunday morning without the strong resolve to go… I didn’t want to bail out simply because there was no one else going, which is to say I wanted to demonstrate a little bit of self-motivation. I helped mum get the cat cage wire from her parents’, then jumped in the shower and committed to going. It took a surprisingly long time from Carrum Downs – 35 minutes, which is about as long as it does from Mt. Eliza. No traffic to speak of; Carrum Downs is just slow to get out of.

I’d originally thought the times were 10am to 4pm, but discovered just before leaving that it was ’till 6pm, which helped my argument for actually going, even though it was noon by then. When I arrived I noticed the signs there said it started at 11am anyway, so I didn’t miss all that much.

I wasn’t sure how busy it would be, which was also one of the mental arguments for not going; I didn’t want to stand around with three other guys and watch little doorstops bang ineffectually into each other. There were a fair few people though, which of course makes sense in hindsight; much of the crowd seemed to be composed of the close friends and family of the competitors themselves, of which there were quite a few. Nonetheless, there were quite a few others – Sidetracked is in any case reasonably busy on weekends, evidently, and a lot of people stopped by briefly inbetween go-kart races, Laserforce games, and whatnot. 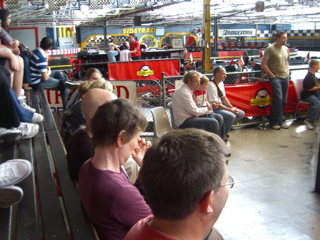 The competition itself was also fairly straightforward – two robots get put in the enclosed arena, they fight for up to three minutes, then they get taken out. Repeat process a dozen times. It was a little slow at times – they took breaks periodically, and it sometimes took quite a while for them to get organised inbetween battles, but there were some pretty entertaining moments which made up for that. I had expected the robots to be dinky and cheap… while they were often pretty dinky looking, I suspect they often weren’t all that cheap, and there was certainly some interesting weapons and techniques employed… the majority seemed to favour flipping mechanisms, while next most popular were high speed wheels or blades. Most were very solidly constructed, which surprised me but of course makes perfect sense… lots of welded sheet metal all round. 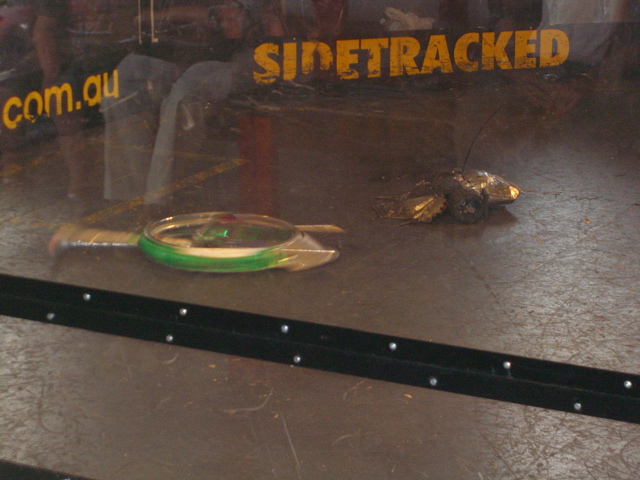 I was there for about two hours… there was more to come, but I think they’d finished the actual tournament, and the remaining battles were just between any two voluntary competitors still alive. I hadn’t slept well the previous night, and woke up after only five or six hours and couldn’t get back to sleep, so I was a bit lethargic, a bit fluffy in the head, and content that I’d seen enough for one day.

While I didn’t take many photos, because the reflections in the arena walls were horrendous, I did film a good 15 minutes or so. Not every battle, of course, just a few random ones. I missed the best bits, and needlessly caught many boring ones, but there were a few good snippets, which I’ve quickly glued together in a short (< 2 min) film, available for your viewing pleasure. It’s just over 4 meg.

In other news, I feel close to roadtripping… although oddly I’m not in the mood today, I increased my resolve over the weekend to get on it soon… I’ll hang around ’till the end of the week in any case for Laz’s birthday shindig, but then after that… we’ll see. I was paid yesterday, so that base is covered… now I just need to get my car serviced, and start packing.