While we were camping I wanted to try some star photography.  I had borrowed Chris’s tripod specially for the occasion, so I was all excited and set to go.  I hadn’t initially thought of doing any astronomical work with the camera, but I chanced upon a discussion of it, with some example images from old Digital Rebels.  Very impressive images, for the cameras involved.  Just stars – nowhere near the resolving power to show things like planets or whatnot in any detail – but cool nonetheless.

And I get this [full scale excerpt of a larger frame]: 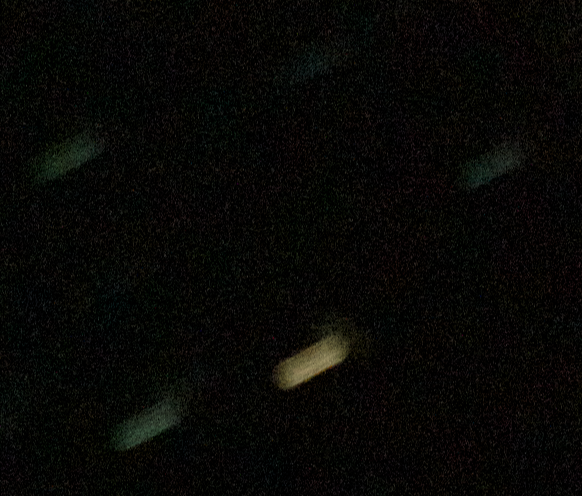 Well shit.  Something vibrated.  I had thought ahead enough to use a delayed shutter, so I could take my hands completely off the camera and give it enough time for the vibrations to die down.  Was that not enough?

After a couple of tries with identical results, I was starting to get a bit annoyed.  Was it the shutter itself that was moving the camera?  Sounds crazy, but it wasn’t the most stable tripod ever.  I tried lowering the centre column, tried putting weight on it, shifted the tripod legs, etc.  No good.  Same streaks.

I tried shooting a different altitude.  The streaks changed length and direction.  Ah-ha!  The vibration depends on the camera orientation.  Well, that’s a clue, innit?

Long story short, yes, but my suspicions were totally off-base.  It was Marisa that pointed out the embarrassingly obvious – the stars move.  A quick back of the hand calculation put their motion at up to a ninth of a degree, over a 30 second exposure.  With 300mms of zoom, that’d surely be more than enough to explain the motion.  And why changing the target portion of the sky changed the direction and magnitude.

Then Marisa added further to my intellectual smack-down by showing me how to find the North star, for which I otherwise had no means to find, and thus have a pretty good idea where to look for a stable reference point.  And the end result was this: 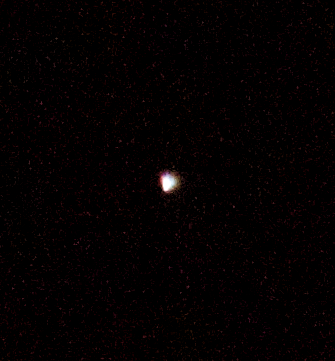 Not perfect, granted – looks like a stubby little shuttlecock – but clearly we had identified the problem.  Hah.  I also verified the hypothesis by cranking the ISO way up and doing half-second exposures of previously streaky stars, yielding now much shorter streaks, if any.

FYI assuming 86,400 seconds in a day, the distance travelled by a star on the celestial equator would be exactly 0.125 degrees.  So my 1/9th estimate was pretty bloody good, if I may say so myself, for being done in my head by the side of our symbolic campfire.  Symbolic because there was a park-wide ban on wood/charcoal fires.  So we gathered around our propane lantern.  Just as romantic, only not really.

Also, my camera cannot auto-focus on stars, so I had to resort to manual focus.  I don’t know how close I got to optimal, but the lens reported a focal distance of ~40 metres, so that’s not too bad.  Unfortunately as far as I’m aware there’s no way for me to see the focal distance except long after the fact, in Aperture via the embedded metadata.