This morning, pop, Chris & I took the catamaran down to the beach. I suggested Mt. Martha beach, but we ended up stopping at Mills beach since it was, well, closer. There weren’t many people there – a handful of women with their young kids, and a few random construction guys passing in and out – presumably working on the life saving club there. The weather was warm enough, but not hot enough for normal beachgoers, and with the occasionally gusty wind, it wasn’t too surprising how quiet things were. Plus, of course, it’s a Wednesday – kids are at school, people are at work, etc.

Anyway, it was all pretty simple – pack everything up, throw the boat on the trailer, and then head off. Unpacking took a while – we had to carry the boat a fair way from the car park down onto the beach, and then along a bit out of the way of the kids. You start to notice the weight over that distance, when carrying the back at least.

It took a fair while to get everything setup. I was of course busy photographing the event, and pop & Chris were being slack and not doing much. ;) Pop wasn’t confident about heading out on it himself, so Chris & I were to be the maiden (albeit once divorced) voyage captains. After a bit of general sailing tutoring in the sand, we were ready to go. The wind was a south-easterly, but shifting from almost southerly to easterly. It was reasonably strong at times, although very erratic. Horrible conditions for a first-time sail, but, within parameters.

So, we walked her out into shallow water, climbed aboard, and were off! It surprised me how much speed we got up with only a small amount of wind, although it frequently died completely, which was probably for the best – otherwise we’d probably be off half way to St. Kilda before we knew it. :)

There were a few things that surprised me. One was how the boat pitches in the wind, especially in a headwind – Chris & I had to swap sides at least twice to try and rebalance, and I found myself more than once lying in the middle praying we didn’t go tipping over. Partly because I’m sure getting the boat out of the water is not trivial – I had no luck wind surfing when I tried years ago, if that’s any indication – and partly because those damn evil little jellyfish were around once more – the same little ones that, as it turns out, can have tentacles over a metre long, and do actually sting painfully.

Chris & I took turns steering, both trying to get the hang of it… I’d never realised – simply because I’d never thought about it – how hard it is to sail into a headwind, especially one which dies randomly. It was quite a struggle to get back to the south end of the beach – we repeatedly got stuck trying to turn across the wind. We had a paddle, but it was difficult to get a good angle without unbalancing the boat, and in any case it broke part way through; it was already broken, years ago, and pop stuck it back together with superglue, which lasted all of about 15 minutes.

All in all we were probably only out on the water for about 45 minutes in total – two trips, the first just to test that we could actually get back into shore, the second because the first was too short :) – but the whole episode took a few hours; what with all the setup, unpacking, then later packing. Plus lunch.

We checked the pontoons after each sail, of course, and found virtually no water in them… which is surprising because twice I cracked the fibreglass when moving about. It would be nice to replace the fibreglass strips and re-varnish the whole thing, but… meh, I’m lazy. :D

I took a bunch of photos while we were on the beach – none while we were sailing, unfortunately, since of course I wasn’t going to carry my camera with me. I might post them up at some point, but for now, he’s a relative picturesque one. 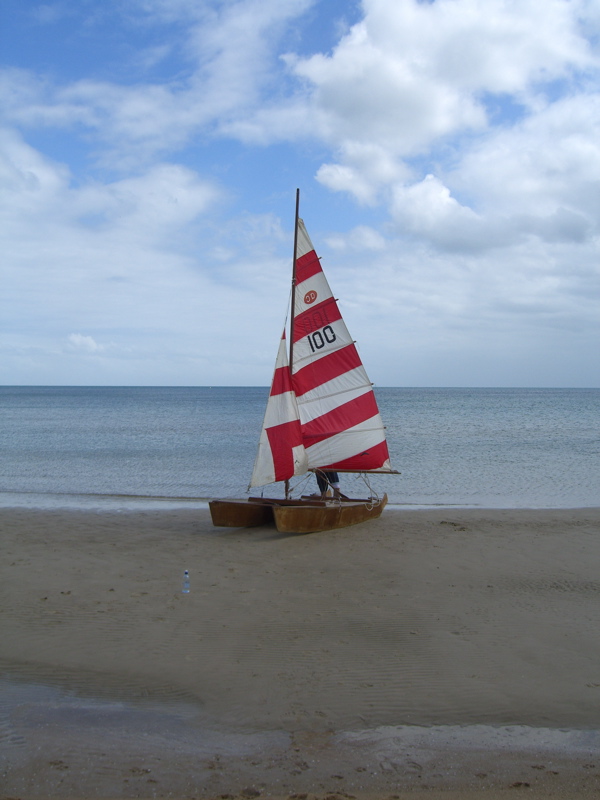