A bit before Christmas I decided it was time to get rid of all the old computer crap that’s filling up two closets, half a wardrobe, and the back corner of the study. There’s nothing wrong with any of it – a whole range of ancient Macs, printers, a pristine Apple OneScanner, Zip drives, hard drives, SyQuest drives (!! :D), and more. I loathe to just throw them out, so I resolved to take them to a recycling place; perhaps they can find good homes somewhere, or at the very least be properly recycled rather than going into landfill.

Of course, while that sentiment was rather green and fuzzy, in practice it turned out to be surprisingly difficult to carry through on. The nearest computer recycler I’ve yet found is in Ringwood. Hmm. They sound like exactly what I want – they refurbish old machines and give them to people in need. Hopefully all the crap I’ve got isn’t too old, even for them. :)

Anyway, they’re also only open Tuesdays and Thursdays, which is annoying because there’s little chance I’ll ever happen to be up that way on one of those days. Thus, it looks like this Thursday I’ll be making a trip up there for no other reason. Perhaps I can catch up with people while I’m there, and not make it such a trip.

But before I do that I need to clean the machines up – wipe off all the proprietary software, any documents and whatnot still on them, etc. I hadn’t actually expected there to be much there – certainly nothing of interest. But hey, as most people who know me will attest, I’m a bit of a hoarder of information, and have a stubborn, strong nostalgic streak. I happened by chance to pull out the oldest machine first, the IIvx – the first computer we ever owned – and it is a veritable treasure trove of ancient history. I didn’t really remember, but as it turns out I had internet access back then – it’s got Eudora and Netscape 2.0 installed, along with NCSA Telnet, Fetch 3.0.3, and a few other utilities. In terms of general apps we have Adobe Dimensions (1.0?), Illustrator 5.5, Photoshop 3.0, Streamline 3.1… then there’s Word 5, Quark XPress 3.3, GraphicConverter 3.0.2 – built on 11/03/97, according to Get Info – and of course the once ubiquitous StuffIt – version 3.0.7! :D 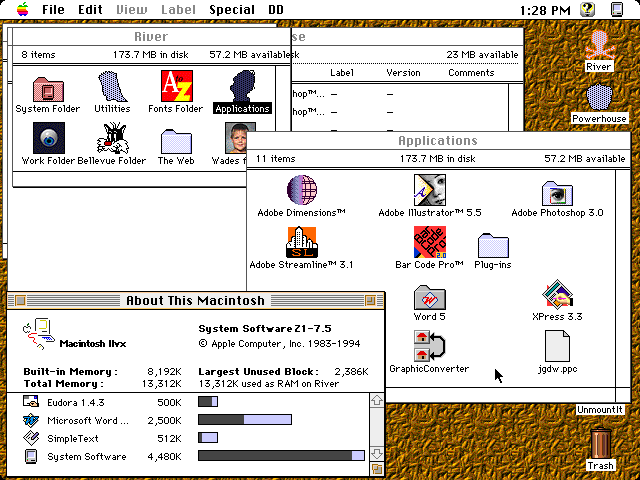 And, most handily, there’s still a copy of Norton Utilities 2.0 on it, which includes the “Wipe Info” program I’ll need to clear this machine out. It also has “Speed Disk”, which I now recall quite clearly – I used to run that every other week, it seems, so as to squeeze out that extra few % performance. These days it’s just a lost cause, I guess – within a week of doing a clean OS install you’re down to half speed, and there ain’t much you can do about it. :/

Ah, things were simpler back in the old days. There was no Spotlight or .Mac Sync, to conveniently kill performance at random intervals. There were no 2 gigabyte temp directories, filled with precompiled headers and icon caches and whatever else. Heck, this IIvx has a 230 meg hard drive, and with all the apps and documents on it still has 57.1 meg free.

And there was no hard drive failure. This 230 meg drive is now at least 12 years old – the IIvx was released in October 1993, discontinued in October 1994, according to Mactracker. Back in those days it came with four 30-pin SIMM slots (in addition to the 4 meg SIMM soldered onto the motherboard), which when filled with the extortionately expensive 16 meg RAM modules, could take you up to an almost unheard of 68 meg of memory. That’s enough to run over 130 copies of Eudora simultaneously. Outrageous! :D

‘course, it still works, and is still newer than pop’s old Amstrad PC (as in, original IBM PC clone kind of stuff – even scarier :D ), which he until a few years ago still used occasionally.

In amongst all my email – which I’m saving as I write to a Zip disk, which seems to be the fastest (if not the only) way to actually get stuff off that machine and onto my Powerbook (via the G4 tower) – there’s a whole bunch of things I’d forgotten about. I’ll go through the email properly later – I’ve already found a few tidbits that I think I’ll publish here for general public inquiry and ridicule ;) – but a few things can be noted immediately. First, there was the Merced mailing list. If memory serves, Merced was the code name of an Intel project which was supposedly going to be the CPU to end all CPUs, replacing the ageing IA-32 architecture. In reality I think I remember someone mentioning a while ago that Merced more or less faded into oblivion, but did have some eventual impact on the Itanium or somesuch. I don’t know… back then I knew so little about the hardware itself; it was all childish showboating and rampant speculation.

Anyway, this mailing list was similarly predominantly just wanton speculation and hyperbole about this fancy new architecture that supposedly actually existed. I can’t recall any more details than that… but I suspect I was only on the mailing list to keep a watchful eye on Intel; one of the other mailing lists I was on – you got all your news and whatnot through email in those days, not the web – was “Anti-Microsoft News”… that pretty much says it all. :)

I was also on the Apple “EvangeList”. I can’t recall anything much about that; I’ll see if anything jumps out when I go through it later. :) Although I’ve just noticed, while it saves them out to Zip disk – I may well never complain about Mail’s lack of speed again – that there’s one titled “Will Apple Survive? discussion at suite101″… that’s dated the 19th of January 1998… that’s not long before the original Bondi Blue iMacs were released, in May 1998 (well, announced; they didn’t ship until August). And I think we know how that story goes since then. :)

I’m reminded also about the benefits of OS X over Classic MacOS… Eudora just shat itself trying to open a mailbox which was supposedly corrupt – or, given it was the Anti-Microsoft News one, simply too full of flammable material to be processed – which caused it to quit, and when I tried to relaunch it the whole system froze. Ah yes, the good old days. And now I have to wait another ten minutes for it to boot again. Gah! 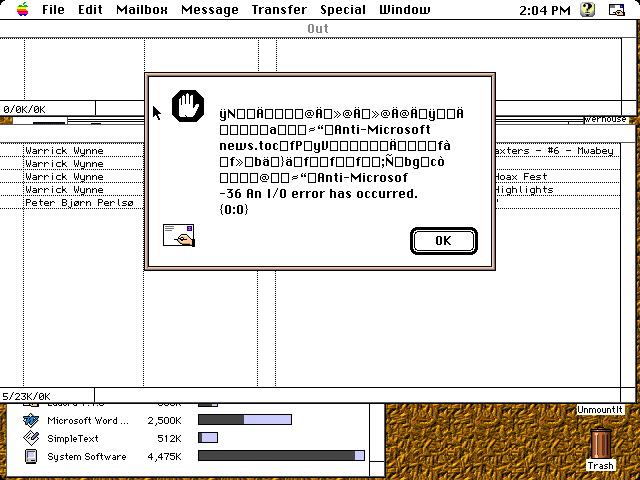 And it died again upon restart when I tried to mount the Zip disk. No automount for you. The error was that the FPU coprocessor wasn’t installed. I had thought it didn’t have an FPU, but Mactracker says otherwise… as does some of the system utils. Well, the ones that aren’t part FWB Hard Disk Toolkit.

This may be the end of this particular archaeological expedition. :/

Also, “SM <addy>” is the command to read memory in Macsbug. :D I’m yet to discover any others. “Die in the arse” didn’t seem to produce any immediate effect, although of course that may be because it already had. ;)

Apparently the gods of ancient technology have forsaken me… that or are providing me with an unexpected nostalgic bounty of failure. Maybe I was being a bit to optimistic when I claimed these machines were all still in working order… :)

And just for one final finale (eat me grammatical gremlins :P ), here’s Netscape 2.02 (or was it 2.03?) in all it’s glory. I can’t believe we actually used to get around on the web with this… although it’s conversely pretty sad how little we’ve progressed. :( 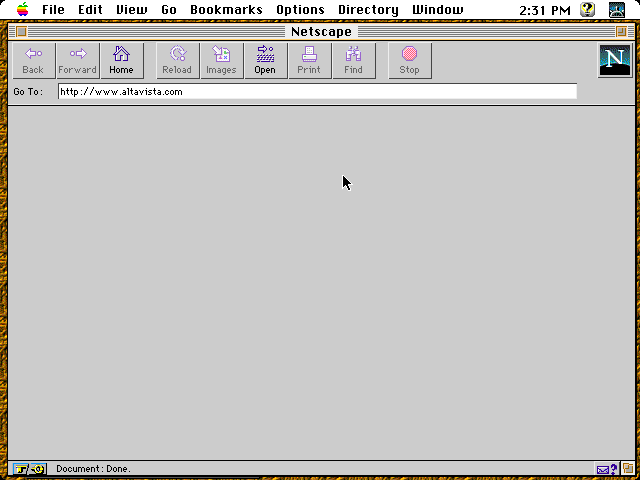