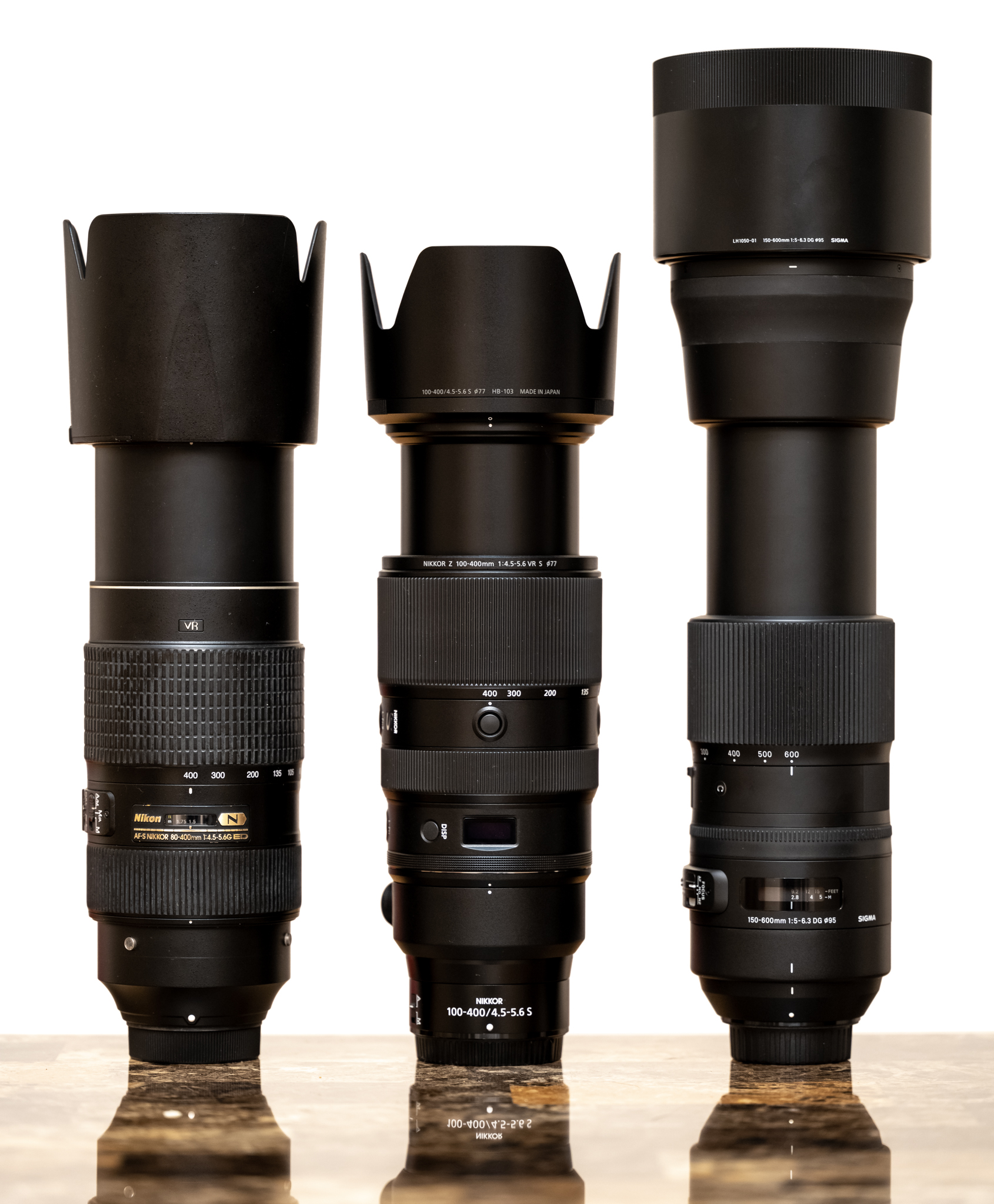 This is the second post in a series of evaluations of the Nikkor Z 100-400. Please refer to the first post for details about the test equipment & methodology.

In this post, I’m going to compare performance in the image centre between these three telephoto lenses at 400mm:

Unlike in the first post, where the focus was solely on the 100-400, I won’t provide exhaustive sample images of all apertures for all lenses – that would just be overwhelming. Instead, I’ll just provide the noteworthy cases.

Note that in practice I’ve tended to favour f/7.1 on the 80-400, including on 24 MP DX cameras which have higher pixel densities than the Z7 (and therefore should be more sensitive to diffraction, not less). That’s based on a large amount of real-world experience. There’s several possible explanations for the discrepancy, but my guess is that the increased depth of field, of f/7.1 over f/6.3, helps in practice because it:

This was such a surprise that I went back and took many more photos with the 100-400, in a variety of modes (various autofocus modes, manual focus, VR on & off, silent shutter on & off), but the results were consistent – the 100-400 is much softer at 400 than its eight year old predecessor, let-alone the 150-600.

Note: the difference in sharpness is partially obscured by the JPEG compression used for the images in this post, even though I used the maximum possible JPEG quality. All my written statements throughout these tests are based on comparing the NEFs in Lightroom.

The 150-600 is out for this particular subject distance because it can’t focus this close.

At this point the comparison is getting tricky, because:

It’s pretty close, between the two. There seems to be similar resolution on the image sensor, so the difference in subject detail is solely because of the difference in effective focal length. If you allow for that, then there’s a notable advantage to the 100-400.

Note that I’ve also included the 150-600 at 600, in case you’re interested in comparing the maximum possible magnification across the three lenses.

Note: I don’t know why there’s such significant discrepancies in exposure, particularly with the 80-400. This was reproducible. The same exposure settings were used for all lenses. Possibly the differing fields of view impacted the camera’s metering?

In real-world use I’ve only occasionally felt the 80-400’s ~6ft MFD was a problem. Sure, sometimes my subject would be too close and/or small, but there’s practical challenges with getting physically closer to a lot of subjects (e.g. skittish wildlife), and for really small subjects I’d be inclined to switch to a macro lens anyway.

Plus, the 80-400 compares very favourably to many other zoom telephotos – e.g. the Sigma 150-600 C can only focus down to about 3 metres (~10ft). In theory it offers the same reproduction ratio of 0.2, but in practice I’ve often had problems with my subject being too close for the 150-600. Plus, as you see (above) it sacrifices a lot of image quality to do even that, such that the 80-400 is clearly the superior of the two when maximum magnification is required. Of course, the new 100-400 is way better than either of them.

All of which is to say: I’m impressed and intrigued by what the 100-400 can do in this regard. Almost halving the MFD while giving me 2x more effective magnification is tremendous. I still haven’t had a chance to use it in the real world, but I’m really looking forward to the possibilities – especially for small wildlife like lizards, or flora like flowers, the 100-400 looks like it’s going to be by far the superior option.

😧A surprise upset! I had assumed the 100-400 would be at least as sharp as the 80-400, and of course hoped it’d be even sharper. The 80-400 has always had good sharpness at 400 in my experience, so there wasn’t a lot of room for it to be surpassed. Still, that the 100-400 is much softer (at all but the very closest subject distances) is very disappointing.

The only thing the 100-400 has going for it (so far) is with very close subjects – there, the 100-400 is vastly superior, in large part because it can simply focus much closer while simultaneously retaining more of its nominal 400mm focal length. If you expect your subjects to always be less than ~10ft away, the 100-400 is clearly the better lens.

The 150-600 results surprised me, and may be tending unrepresentative, as they don’t match my real-world experience. I do think the 150-600 is a good lens – and excellent value at a quarter the price of either of the other two – but I’ve found it just doesn’t deliver results quite as good – nor as reliably – as the 80-400, except when you utilise its 50% extra reach. I strongly suspect this is mostly due to differences in image stabilisation – the 80-400 has the best image stabilisation of any lens I’ve ever used, while the 150-600’s image stabilisation is average at best.

Granted, this is only in the centre of the frame. Maybe the 100-400 has redeeming image qualities elsewhere in the frame? A subject for a subsequent post, perhaps.