I just got back from the Arcade Fire concert I mentioned previously. LCD Soundsystem also played, and a band called “Wild Light”, that no-one had heard of. I didn’t mind them much at all, but no-one else seemed particularly impressed.

All in all it was pretty good. LCD Soundsystem were pretty good, and the Arcade Fire weren’t half bad. I don’t know any of their songs, and I couldn’t make out most of the words, so I have no idea what they were singing about, but, the melody was good. :D 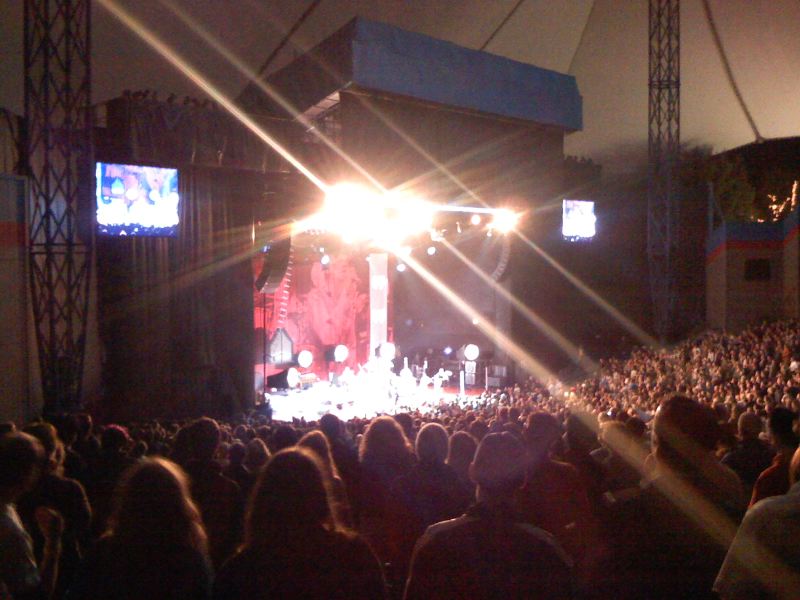 It was up at the Shoreline Amphitheatre in Mountain View. We had general admission tickets, meaning the large lawn at the top of the amphitheatre, where you could still mostly see the stage, but the sound wasn’t quite as clear, and there were, naturally, no seats other than the grass. And it rained a bit to start with.

So, we snuck down to the lower levels – at first making it successfully to the first level of seats, but then that wasn’t enough for some of the guys – we also met up with Tim and a whole host of other people he knew – so we snuck further down to the next section where they have the VIP & private boxes… I’m not sure how long we thought that’d last, but it was fun for the ten minutes it did. :D Tim just led us to some random box which already had three girls in it, dancing and going off. So we were pretty pleased with how that turned out, while it lasted. When kicked out of that one, we just wandered to the other side of the amphitheatre and tried another one. Again, though, ten or fifteen minutes later we were booted out once more. So, we gave up, not wanting to spend the whole night sneaking about and getting booted out, so we intended to sneak back up to the seats we’d had originally, where we figured we could remain inconspicuous. As it turned out, though, they’d opened up that first area of seats to everyone anyway, so no more sneaking was required.

The seats we had in the end were quite close to the stage – pretty reasonable view – but off to the side… I suspect the sound wasn’t as good as a result, but, meh.

Anyway, my ears are still ringing, but it was a good night out. And it’s inspired me to check out various other musical venues and events in the area… they have a bunch of names I know playing at the Shoreline in the next two months, including Dave Matthews, She Wants Revenge, John Mayer and Metallica. Dunno if I’ll go to any of them, but, maybe. I noticed also, randomly, that Jewel is playing in San Jose in November, which I’d quite like to see.